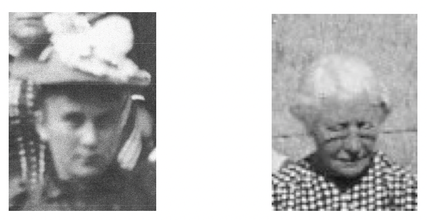 Marriage:         14 Jun 1924, St. Mary’s Church, San Francisco, CA
As far as is known, Nora was the first child born to Michael and Johanna.  Nora was born January 3, 1863, in Carlton, Australia.  She was two and a half when the family sailed from Melbourne to San Francisco.  Nora attended St. Gertrude’s Academy for Girls, an academic boarding school in Rio Vista founded by the Sisters of Mercy and funded by donations from Mr. Joseph Bruning, a large landholder and local businessman. Several of the Callaghan third generation also attended St. Gertrude’s and its later boys’ counterpart, St. Joseph’s Academy.
As a young woman in her 20s, Nora did not seem to be particularly social.  The River News, the Rio Vista newspaper founded in 1890, always carried items about various parties, dances, and balls.  Nora’s name never appeared among the attendees, even though her brothers were almost always there.  The only times she did appear in the paper were for her brother John’s wedding in September 1890, for the St. Charles Borromeo Church Fairs in November 1892 and October 1902, and for the St. Joseph’s Church Fair in 1894.  She was involved in the 1892 “fancy table” (which brought in $383.80) and the 1902 “supper table” with her sisters-in-law.
On December 7, 1919, Nora bought the big, beautiful Victorian at the corner of North 2nd and Sacramento from the estate of Philip Clarridge.  Michael had been ill, and she decided it would be better for him to live in town instead of out on the Ranch.  Nora had gone to St. Gertrude’s Academy with Philip’s sister Rose and brother Stephen and had been social equal of Rose.  She lived there for the next 37 years.  A local resident remembered learning needlepoint in Nora’s parlor in the 1920s.

Nora was an astute businesswoman.  She and Michael had invested in the founding of the Bank of Rio Vista early on.  In 1918, she bought property on the 300 block of Main Street in Rio Vista from Mattie Chase Makemson, the widow of the Dr. W.S. Makemson.  Dr. Makemson was a pillar of the community and had been on the board of directors of the Rio Vista Canning Company.  The brick building, which still stands there, was built in 1929 and became the site of the Skaggs Grocery Company (later to become Safeway).

Nora bought the site of St. Joseph’s Military academy along with its riverfront property in May 1924.  From Michael, she had inherited the west half of the Lower ranch and rented it to first Jim and then Mel, who would inherit it after her death.  In the late 1930s, she bought Bill’s part of the ranch to relieve his debts and to insure that it stayed in the family.  She was also smart enough to separate the gas and mineral rights from the real properties that she owned so that the gas rights would stay in the family even if the properties were sold.  Lester did not know to do that when he and Madelyn sold their father’s part of the ranch, but Nora left percentages of her other gas rights to them to compensate. 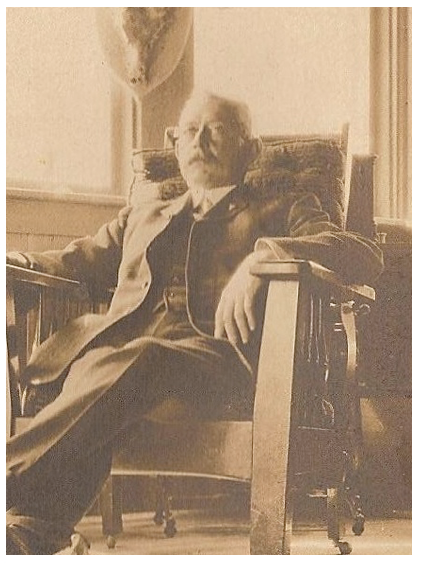 At 61, Nora married James Edward Sullivan, a social acquaintance. Nora had been a friend of his late wife Catharine Fitzpatrick, who had died in June of 1923.  She had vacationed with the Sullivans in San Francisco, where his siblings lived.  She and James had become close during Catharine’s illness.

James was born on November 30, 1863, in San Francisco to Daniel J. Sullivan, a blacksmith from Co. Cork, and Johanna Desmond.  He had grown up with his four brothers and two sisters on the family ranch in Denverton.  In the 1892 Great Register, James was described as 5-feet, 11-inches, with fair complexion, blue eyes and dark hair.  A successful businessman, James had made his money in lumber with his partner Captain Lars Peter Larsen.  Within the family, it was said that Nora owned half the town and married the man who owned the other half.  While not quite true, it gives a sense of her financial and social stature.  According to James’ obituary in the River News Herald,

Mr. Sullivan was regarded throughout Solano County as one of its best types of the representative self-made man.  The same wisdom and sagacity which characterized his business operations entered into his career as a public servant.  Those who have watched his career pay him the compliment of referring to him as an unselfish, generous, and useful citizen, with abundant gracious characteristics which have endeared him to those among whom he labored and whom he has so cheerfully served in county and commercial affairs. 9

His public service included serving as Solano county supervisor and serving Rio Vista as city councilman and mayor (1894 to 1908). 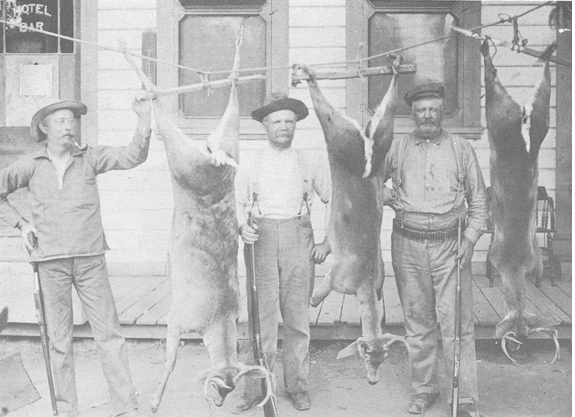 James loved to hunt and was called a “professional marksman” when he won the Thanksgiving Turkey Shoot in 1891.  In 1884, at the age of 21, Jim had settled on 160 acres of land in the Blue Ridge area outside of Vacaville, intending to start a farm.  According to family lore, he won the property in a card game.  He built a small house—only 10’ by 12’—and started clearing land for a vineyard and small orchard.  But after two years, he had only cleared one and a half acres and a 300-yard path from the main road.  The land was overgrown with scrub brush and was difficult to clear.  He gave up on the farming idea but kept the house as a hunting cabin where, over the years, he brought his many friends—including his future brothers-in-law.  He was constantly in the paper for his hunting trips to the area.  Though the cabin is long gone, that land remains in the family.  In the picture above, Jim is the shorter man on the left.

James and Nora married on Saturday, June 14, 1924, at St. Mary’s Church in San Francisco.  Fr. James Donahoe, St. Joseph’s parish priest, traveled to officiate the wedding, and he registered it in Rio Vista.  According to an article that day in The River News, the ceremony was small:  “A very few close friends comprised the wedding party,” including G. W. McGee as best man and James’ sister Mary Sullivan as maid-of-honor.  “The altar of the church had been prepared with beautiful decorations of flowers and lilies of the valley.”  After the wedding, they traveled to Southern California for a two-week honeymoon before returning to Rio Vista.  They moved into Nora’s house on North 2nd Street, where lived together for the next 16 years.  The personal section of The River News-Herald continued to carry items about the travels of Mr. and Mrs. J. E. Sullivan, only now “Mrs.” meant Nora instead of Catharine.

Nora and Jim continued to live comfortably throughout the 1930s.  The Depression did not affect them as adversely as it had so many others, and they were able to help the rest of the family through hard times.  She bought the ranches from her brothers to maintain family ownership, and the Sullivan and Larsen Lumber Company bought property along the waterfront and elsewhere in Rio Vista.

Later in life, Nora also maintained contact with her nieces and nephews who had moved away, writing letters and inviting them to return to visit.  Dolores remembered that she always had hot dogs when they came up from the City.  She showed particular care and concern for John’s children, who were somewhat estranged from their father and whom she had helped raise after their mother’s death in 1908.

The end of 1940 and the beginning of 1941 was a difficult period for Nora.  Her husband James died on October 1, 1940; her brother Jim (to whom she was closest) died in November; her brother John died at the beginning of February; and her niece Ruth died at the end of February.  After Nora’s husband died, Bill’s daughter Theresa moved in with and took care of Nora for the next six years.  Nora died on August 8, 1946, and was laid out in the most expensive glass coffin they could find.  Dolores said she looked like the Pope.  In her estate, she left $10,000 (worth $120,000 in 2013 dollars) to each of her husband’s four nieces and nephews.  To her seven Callaghan nieces and nephews, she bequeathed all or part of 19 pieces of real estate, gas rights, cash, stocks, and other real property worth $367,000.  That estate would be worth $5 million in 2014.  She left the house on North Second to Theresa and Janet, and Theresa lived there for the next ten years.

Several of the properties were owned in partnership the Larsen, Anderson, and McCormack descendants.  Because of the complicated ownership issues, the properties were left in a trust to be managed by Wells Fargo Bank and Union Trust Company.  As they lived between San Jose and Fort Bragg, the heirs became passive, absentee landlords.  In 1948, 20 acres of what had been St Joseph’s Military Academy, including the baseball diamond, were sold to the grammar school district.  Other parcels were sold in the 1950s to be sub-developed.

One of the more frustrating situations was that the waterfront property around St. Joseph’s Cut was not properly maintained because the family was so spread out and no one had the money or focus to make the required improvements.  The City condemned seven buildings and the wharf as “an eyesore and blight to the community.”  In 1966, with the heirs reeling from the deaths of three of the seven cousins, the City of Rio Vista moved to take over the property through a court judgment.  It was rebuilt as the Marina and The Point Restaurant and became highly profitable. On the land at the end of Main Street, the new City Hall was built.  This “seizure,” as Dolores and Nadine related it, highlighted the next generation’s social (more than financial) sense of loss.   The condemning of the wharves felt like a personal insult toward their parents.

After the debacle with the waterfront property, the Wells Fargo trust was dissolved and, in 1968, a new tenants-in-common partnership, named Vista Del Rio Properties, was formed among the Callaghan, Larsen, Anderson, and McCormack heirs to Nora and Jim’s real estate.  It was initially managed by Albert Anderson, and day-to-day decisions were made by a committee of three.  After Albert’s death in 1973, Douglas McCormack took over and, after he passed, his son Thomas assumed leadership.  A few of the properties were sold as opportunities arose.  By 1994, the ownerships of the final nine properties were turned over to a property management company to handle.  There were 20 specifically mentioned individuals and trust entities mentioned in the 1994 annual meeting agenda, representing dozens of people.  It was thought that a few individuals could buy the others out, but the people with the largest shares (at 12.5 percent) would have had to spend too much money to gain a majority share — not a wise business move.

Three of the properties underwent undergoing environmental clean up, now complete.  Rent still comes in from the Rio Sands Motel, Dolk Tractor, and the Chevron gas station and McDonald’s on Highway 12, but it is relatively minimal.  In 2013, Dolores’s 6.4 percent of Vista del Rio only brought her son $1,300 in income (a drop of 90 percent from five years before) and her share of the properties would only be worth $12,000 if sold, and would have to be split three ways with his siblings.  Now that the EPA cleanup is done, the properties are being reappraised so that future opportunities can be seized as they come along.