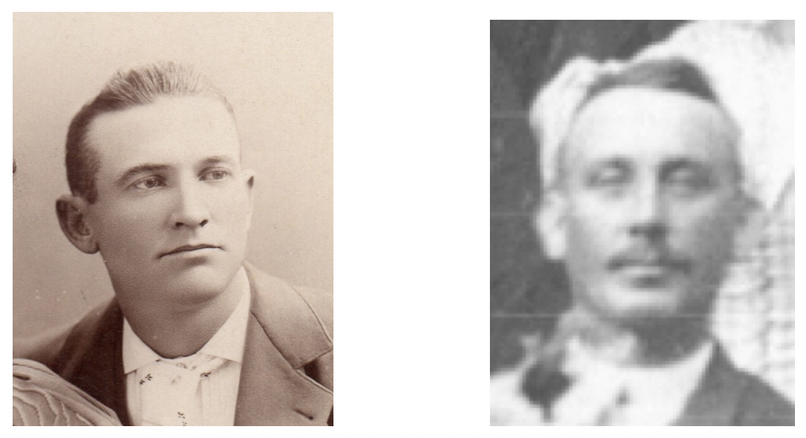 On September 18, 1867, in San Francisco, Jim was the first of the Callaghans to be born in America.  Jim spent most of his life on the ranch, though he did attend St. Mary's College in 1884.  Like his brothers, Jim did all necessary labor on the ranch and seems to have been particularly adept at mechanical work and blacksmithing.  Nadine remembered that he had a blacksmith shop behind the garage, and Steve Woods said his father, Bob, began to learn his mechanics skills by following Jim around the ranch and fixing things.

The Great Register of Voters of 1892 described John as a farmer, 5-feet, 10-inches, with fair complexion, blue eyes, and brown hair.  Tall, good-looking, and athletic like his brother, Jim was always in the lists of attendees at the local parties, dances, grand balls, and social events.  He was even gently teased in the paper on December 5, 1890, for “breaking up his buggy and slightly bruising his companion” on the way home late one night from a ball.  “Better not keep such late hours another time.”  There is no indication of who the “bruised companion” may have been.

Jim played right field for the Birds Landing baseball team.  Something of an outspoken character when he was younger, he is quoted in the paper on January 15, 1892, speaking about the upcoming baseball game between Birds Landing and Rio Vista, that they “are going to put up good ball next Sunday and send the Rio Vistans home weeping.”  Birds Landing lost and his brother, the team captain, benched Jim for the next game.

The paper also kept track of the travels of local people and, in 1894, Jim and his brother Will were mentioned again:

Will Callaghan returned this week from a trip to the southern part of the state.  His brother, James Callaghan, is talking of also making a tour over much of the same ground, going as far as Los Angeles.  The boys are hard workers during the summer and they well earn a vacation and a change of scenery in the autumn.  We are a little afraid, however, that James may be intending to make his trip answer a double purpose.  To the south is a customary route for wedding tours. 12

Louise was the eldest of the nine children born on the ranch owned by Neil C. Anderson and Anna Thorhaven of Denmark.  Neil was a farmer in the Montezuma Hills, a self-made man born in Odense, Fyen, Denmark, who had come to America in 1871 with his three brothers.  The Andersons are a very prolific and successful clan that is still present in the Montezuma Hills today.  By the year 2010, there were over 100 living descendants of Neal Anderson and his brothers.

Louise and Jim married in San Francisco on January 13, 1895.  Jim’s brother Bill was the best man.  Lulu attended St. Gertrude’s Academy (1893-96) at the time, and she continued her education during the first year of their marriage.  Later that year they had their first child, a daughter whom they named Mae (Mary).  Like John and Ellen, Jim and his family lived with their parents until 1897, when, according to The River News (February 8, 1897), “John and James Callaghan have each completed a neat cottage on their father’s place east of Birds Landing.”  Jim’s new house was on the west half of the lower ranch, which had been the Clyde and Cliff Gile ranch in 1879.   A second daughter, Rita, arrived in 1900 and finally a son, James Melvin (Mel), was born in 1903.

The early part of the 20th Century was devoted to raising his children and running the lower ranch.  In 1915, he followed his father as a trustee to the Toland School district.  When Michael and Nora moved into Rio Vista in 1919, Jim and Louise moved out of their “neat cottage” and into the big house on the Home Ranch.  Jim inherited the east half of the lower ranch a year later.

By the end of 1920s, both of Jim’s daughters were married and had moved away.  Now in his fifties, Jim slowly began to slowly pull back from running the Ranch and turn it over to his son Melvin.  The Home Ranch became the place to stay for the members of the third and fourth generations when they returned to visit the family.  Even when Les or Ruth or Madelyn came to visit, they stayed with Jim.

In the 1920s, Jim’s pride and joy was his 1919 green Buick Six touring car.  It made the front page of the paper when he bought it.  Like all the equipment on the farm, Jim learned to repair and maintain it well.  Nadine remembered rides in the countryside with the top down and the windshield open.

In 1935, Jim was likely revitalized by the arrival of his teenaged grandson, Bob Woods, who came to live with his grandparents after his parents’ divorce.  Jim delighted in the role of mentor to another generation and taught Bobby everything he knew about tool and machine repair and about a life-long work ethic.  At the same time, though, both Jim and Bill were in financial trouble.  Nora stepped in to buy Bill’s Ranch, but Jim deeded his over to Louise to protect it and borrowed money from Nora to get out of trouble.

By 1940, Jim had finally retired from farming and let Mel take over running the ranch full time.  Jim was 73 and had contracted lung cancer from years of smoking.  He was hospitalized at St. Mary’s in San Francisco where his niece Janet worked as a nurse.  According to Nadine and Dolores, Janet brought his brother Bill to see him in the hospital.  Jim was furious because they had not been on good terms for years, and he had no intention of reconciling.  Jim died on November 1, 1940, and was buried in the family plot with his parents in Rio Vista.  His obituary said he was “successful in his ranching activities and found many friends in his years of social and civic work.”

It was thought that Jim sold his part of the ranch to his father-in-law, Neal Anderson, during the Depression and rented until his death.  When Neal died in 1942, Louise inherited the ranch and turned it over to her son, Melvin.  But a search of the deeds showed that Louise had been deeded the Home Ranch by Jim in 1936 and had never turned it over to Mel or Rita.  Jim had always rented the west half from Nora and owned the east half.  In 1948, Louise sold the east half to Douglas McCormack and she, Mel, and Millie moved back to “the neat cottage” on the Nora’s west half.