The youngest child of Michael and Johanna Callaghan was William Aloysius.  He was born February 2, 1869, on the Ranch in the Montezuma Hills.  He was baptized six weeks later at St. Alfonse Church in Suisun City.  The next generation of the family referred to him as Old Bill to distinguish him from his son Young Bill, but, when he was younger, the community knew him as Will or Willie.

Like John and James, Bill was enrolled at St. Mary's College, then Christian Brothers’ College, from 1885 to 1890, where he was a Scholar of Merit in 1889. He did receive a diploma awarded in the "Second Degree for his Gentlemanly Demeanor" from the Sacramento Institute.  The Sacramento Institute was St. Mary’s high school segment, and it exists today as the Christian Brothers High School.  The diploma was found in the ashes after his ranch house burned down in the 1970s.  It hangs in Alan Freese’s house.

Bill was popular and athletic like his brothers.  He was an active member of the local YMI (Young Men’s Institute), attended and worked on the local parties and dances, and played baseball for Birds Landing.  The Great Register of 1892 described Bill as 5-feet, 11-inches, fair complexion, with blue eyes and brown hair. 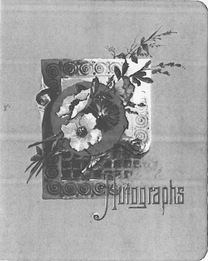 Bill had an autograph book from the spring of 1890 with several names signed “your classmate.”  Some of the autograph pages give hints about Bill’s life at St. Mary’s.  He apparently boarded there for three years and may have played football (J.M. Karl of Placerville referred to them as being called “leather-heads”).  Several young ladies signed the book, always with affectionate words.

The decade of the 1890s was a happy-go-lucky time for the bachelor Bill.  He was often involved with planning dances and celebrations at the Odd Fellows Hall in Birds Landing and in Rio Vista.  He and John ran the upper ranch together, but John took the lead on business matters.  Bill seems to have liked to travel.  Besides the usual family trips down to the city, he took a steamship trip to Seattle and the Pacific Northwest and a train trip to Southern California.

In 1894, the last entry in the autograph book was added by Mary Hazzard: 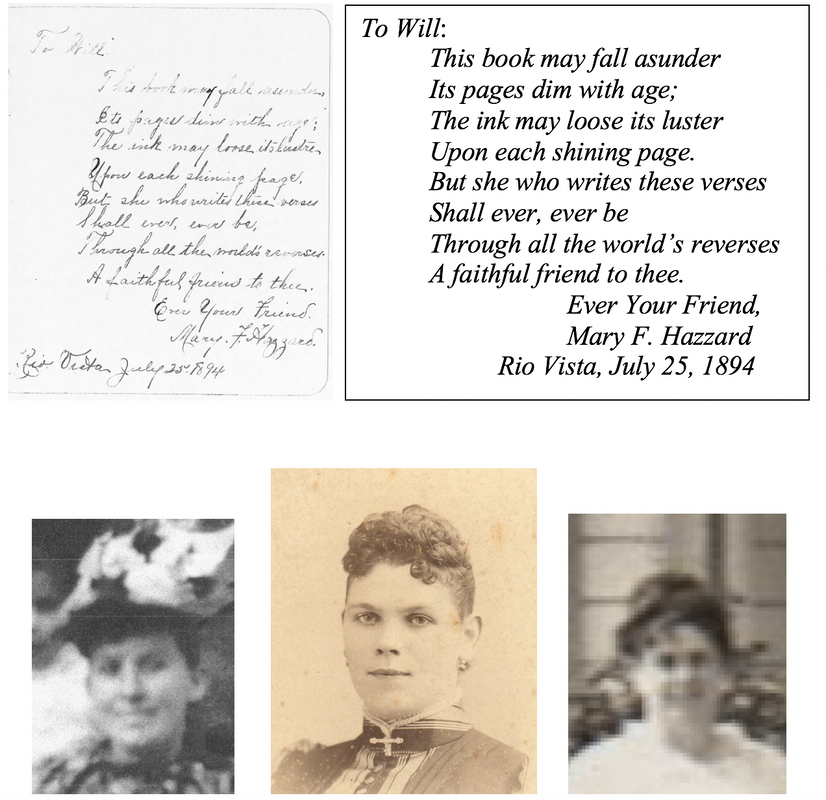 The oldest of four children, Mary Frances Hazzard was born March 4, 1873, in Napa, California.  Her parents were Irish immigrants, John W. Hazzard (a carpenter) and Jane Cunningham.  In 1880, she and her family were living in Yount, Napa, California. In 1893, Mary attended St. Gertrude’s Academy, where she won an award for “Christian Doctrine and Good Conduct.”

After what was, for the time, a long courtship, Bill and Mary married in San Francisco on October 3, 1900.  James Halloran and Mary Hadley were the witnesses.  They lived the next 30 years together at the home ranch.  In September of 1901, their first child, Michael Aloysius, was born.  Unfortunately, he died eight days later.  A daughter, Theresa Elizabeth, was born in 1907, another daughter, Janet Johanna, was born in 1911, and a son, William Xavier, was born in 1912. 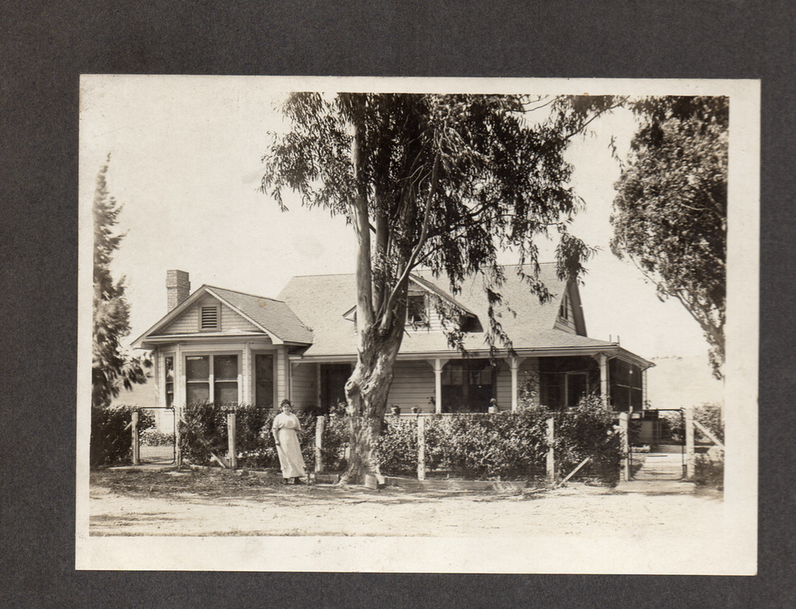 After his sister-in-law Ellen’s death in 1908, Bill became more the front man for the upper ranch.  He continued to represent the family at church festivals and committee programs.  He also did all of the business traveling to Rio Vista, Fairfield, Sacramento, and San Francisco.

Bill believed in higher education.  He was the only one of Michael’s children to graduate from college, though, in the 1890s, St. Mary’s was more comparable to a high school than a university.  All three of his children went to college—Theresa to UC Berkeley, Janet to nursing school in San Francisco, and Bill to Santa Clara University.  Jim’s children only completed high school and two of John’s three children only completed eighth grade.   In 1917, Bill was elected trustee of the Rio Vista High School District.  He had taken up with the new school district where his father and brother had left off with the old one.  He served and was re-elected several times over the next 18 years, often running unopposed.  In 1935, he decided to retire from the committee, and in his spot was elected his sister-in-law Louise’s brother, Neal Anderson, Jr.

In 1930, Mary had been ill for several months but seemed to be on the mend.  On Friday, Oct. 3, she and Bill celebrated their 30th wedding anniversary.  The home ranch was the site of a party “to which a large number of relatives and friends had been present to wish the happily married couple many returns of the day.”   The next day she was ill again, and on Sunday, October 5, Mary succumbed to myocarditis.  Her obituary raves about the eloquently delivered oration by Fr. Keller of Dixon, but it does not quote any of his sermon.  It does say that the talk was “indeed appropriate, for Mrs. Callaghan was universally liked and respected by those who knew her.”  She was 57 years old.

Bill continued to live on the Ranch for another 21 years.  In 1935, he retired from the school board, and, in 1939, he retired from active ranching.  He sold the ranch to Nora so he would have funds on which to live and still keep the ranch in the family.  Nora leased the land to the Sullivan family on the adjacent ranch.  The Sullivans and Callaghans were neighbors and close friends for two generations. Alan Freese, Eugene Sullivan’s grandson, thinks that Bill had something to do with Eugene and his wife getting together.  He also remembers Bill walking over the hill most days to visit Alan’s uncle Thomas Sullivan and the two of them would go to the bar in Birds Landing.  Bill died on June 23, 1951, in Sutter Hospital in Sacramento.  He is buried with Mary in St. Joseph’s Cemetery with his wife.