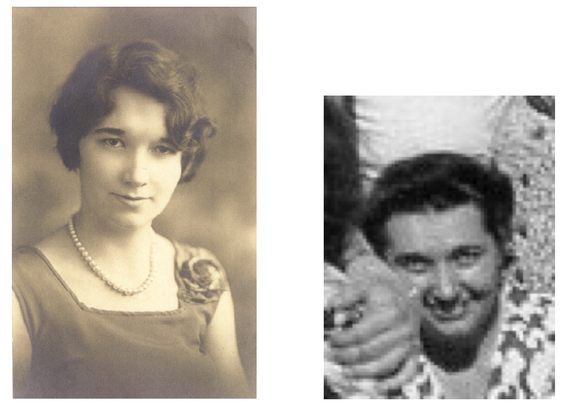 Theresa Elizabeth Callaghan was born September 2, 1907, in Rio Vista. She attended St. Gertrude’s Academy and Rio Vista Union High School.  At Rio Vista Union, she was the junior class secretary, the senior class rep, the literary editor of the yearbook, and the lead in the play The Whole Town Is Talking.  The yearbook’s senior class horoscope listed about Theresa:  nickname—Treas; expression—giddy; redeeming feature—teeth; favorite song--I’m No Man’s Mamma; pastime—dreaming; ambition—reformer; destiny—matron in a prison.  Her senior quote was “Cheerful at morn, she wakes from short repose, breaths the keen air, and carols as she goes.”

At UC Berkeley, Theresa was a member of the Kappa Delta Sorority.  She graduated in 1930.  (Over the next several years, whenever she appeared in an article in the paper, her status as a UC graduated was always noted, as it was a great accomplishment for a small town girl of that time.)  Theresa returned to live on the ranch and was a well-known and well-respected member of Rio Vista society.  She was often in the paper in the society page, volunteering at the church, attending or serving as a hostess at various parties and gatherings, and playing bridge with various neighbors.  She also served as the clerk at the Birds Landing Polling Place during election years.  Alan Freese remembers her and her sister Janet as “very nice looking people, with a style about them.”

After Jim Sullivan died, she moved into Nora’s beautiful Victorian on North 2nd Street and took care of her aunt until Nora passed.  She handled Nora’s business interests in town and was the executrix of her large and intricate estate.  It was through Theresa that many of Nora’s possessions were distributed among the next generation.  She and Janet inherited the house and Theresa lived there until 1956 when they sold it to AC Schaeffer.  Theresa bought a smaller house on North 6th Street, where she lived until her death.

In 1951, Theresa became a third grade teacher at Riverview School and, according to her obituary, “was one of the most widely loved members of the faculty as well as of the Rio Vista community.”  Theresa died of cancer on June 28, 1962, and is buried beside Nora and Jim Sullivan in Rio Vista.  Theresa never married.  After all, she wasn’t No Man’s Mamma.