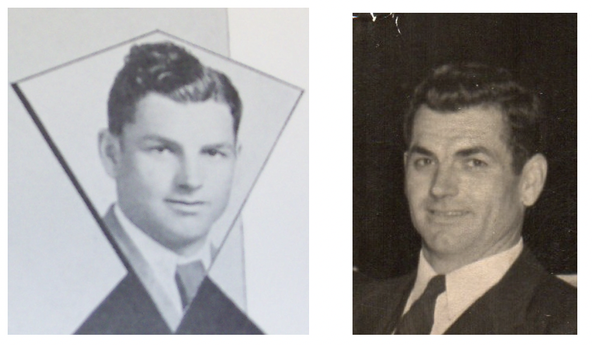 William Xavier Callaghan was the last Callaghan born and reared on the Ranch.  He was born on August 12, 1912.  He went to Rio Vista grammar and high schools.  At Rio Vista Union, he was the freshman class president, the sophomore vice president, played the clarinet, played right field, and was the captain on the basketball team.  The yearbook’s senior class horoscope listed about Bill:  nickname—Windy; expression—collegiate; redeeming feature—teeth; favorite saying--censored; always seen—joking; weakness—his Ford; ambition—football player;  destiny—hod carrier.   Her senior quote was “His limbs were cast in manly mold for hardy sports and contests bold.”  The joke section of the yearbook included this poem:

Bill Callaghan said
His car could not skid.
This monument shows
That it could and it did.

His weakness, clearly, was his Ford.  Bill achieved his ambition when he was accepted to Santa Clara University where he played football and earned a degree in engineering.

After college, Bill went to work for Shell Oil.  His job entailed driving about Northern California, servicing his clients.  In February of 1939, he fell asleep at the wheel and crashed his car into a telephone pole near Sonoma.  The car was totaled and the pole cut in half.  Bill fractured his left shoulder, pelvis and hip.  He spent several weeks in the hospital at Vineburg, near Sonoma, but he recovered well.  Cars were still his weakness. 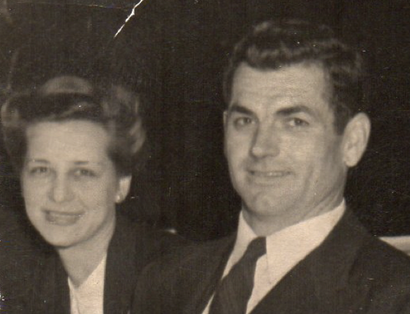 In the early 1940s, Bill met Eleanor Martha Wolff.  She was born June 2, 1916, in Denver, Colorado, to Frank H. Wolff and Mary J. Johnson (Bohemian and Swedish immigrants respectively).  She was the youngest of seven children.

Bill and Eleanor were married in Los Angeles, California, on July 6, 1942.  In 1944, they were living in San Diego and Bill’s occupation was listed as “lever man.”

On September 26, 1949, he changed companies and went to work for Standard Oil of California, and the company moved him to Fort Bragg, California, to be the petroleum distributor.  Alan Freese:

The only Callaghan that I really knew was Bill.  He would always come by and visit when he was in the area.  When I served in the Coast Guard, we pulled into Fort Bragg for some fuel on our way to the shipyards in S.F.  Three of my shipmates and I went out for a beer that evening and ran into Bill who had just stopped in for a drink after work.  I believe his business was located in the harbor.  Well, we had a great hour or so, and my buddies thought he was the greatest, as we could not pay for a drink.  We had some minor repairs to do and stayed another night, and Bill invited me to dinner at his house.  I do recall as a little kid, visiting my grandparents at the ranch, and we would all walk back to the Callaghan ranch and visit during the summer.  Bill Sr. was still alive.  Theresa and Janet were living in Rio Vista, and they would come out during our visits.  They were very nice looking people and had a style about them.  The two families were pretty close, and I think Bill was instrumental in connecting my mom and dad. 18

Despite their age difference, Bill and Les were very close.  Les considered Bill to be the little brother he never had.  They shared a strong common interest in sports. They would go to the Little Big Game (Santa Clara-St. Mary’s) whenever they could and had a friendly rivalry over the outcome.  They also shared a common strong faith.

According to Dolores, Bill and Eleanor wanted very much to have children.  They only had one child, though, and, unfortunately, he was still born on January 10, 1956.

Eleanor died on January 15, 1958, at the French Hospital in San Francisco.  Dolores remembered Eleanor as a very sweet and kind person.  Bill later gave Eleanor’s wedding ring to Dolores and she had the diamond and the diamonds from her own and her mother’s wedding rings mounted into a beautiful cocktail ring.

Several months after Eleanor died, Bill remarried in Monterey to Florence M. Muldoon.  Florence was the 12th of the 13 children of James P. Muldoon and Margaret McCartin.  She was born and raised in Eau Claure, Wisconsin, and was a third generation American whose great grandfather had been born in Co. Fermanagh, Ireland, in 1810.  Dolores referred to her as “the little redhead,” but could not remember anything else about her.  Bill and Florence divorced sometime before 1963, but she continued to use the Callaghan name until her death in 2010.

Bill remarried on April 6, 1963, in Reno, Nevada.  His third wife was Arlene Elizabeth (Billie) Blackwelder.  Billie was born Arlene Dolisi October 4, 1906, in Lawrence, Kansas.  Her parents were John Dolisi, a salesman from Eudora Kansas,, and Alvena Pilla.  Both had immigrant parents from Germany.  She had been married twice before, just like Bill.  Her first husband was an auto mechanic from Olathe, Kansas, named Elbert Marley.  The divorced while he was in the Navy during the War. She was also the widow of Irving R. Blackwelder, the successful Birds Landing businessman and president of Blackwelder Manufacturing.  Bill and Billie had known each other in Rio Vista.  They were married for just under four years when he died of lung cancer on March 30, 1967, at Children’s Hospital in San Francisco.  He is buried with Eleanor and Michael at Rose Memorial Park in Fort Bragg.

Bill’s obituary referred to him as a well-known and respected businessman and civic leader in Fort Bragg. He was an active member of Our Lady of Good Counsel Catholic Church.  Bill had been active in sports and followed sports his entire life. He had been at Giants’ Spring Training Camp just before entering the hospital.

Bill put all of his Rio Vista holdings into a trust for his cousins Lester, Geri, Nadine, and Bob, in order to keep the last part of the ranch in the family.  Billie was the trustee.  Dolores and Nadine would often visit her in Rossmoor during the 1970s, 1980s, and 1990s.  Kevin went along a few times and once asked about old family letters.  Billie brought out Bill’s autograph book and the proposal letter from Michael to Johanna, which she had kept for the family, and she gave it to him to preserve for the future generations.

Billie survived to the age of 96.  She died on September 12, 2002, in Rancho Mirage, California, where she had moved for the last two years of her life to be near her nephew.  Billie had managed Bill’s trust until her death, whereupon the heirs assigned Grace Woods as successor trustee.  Grace turned that responsibility over to Kevin in 2007.